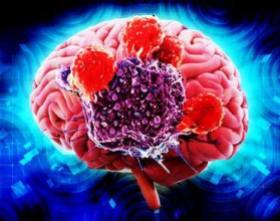 Any time a child is diagnosed with a brain tumour or, truth be told, any type of cancer, the most obvious question many parents ask is “Why? What caused my child to develop a brain tumour?”
Unfortunately, there is no easy answer to this question.
Scientists now believe that the vast majority of brain tumours in children are the result of random gene mutations but have no satisfying answer as to why a particular gene mutation occurred or why it led to the growth of a brain tumour.
Whether benign or malignant, a tumour grows when certain cells grow, divide, and replicate more quickly than normal cells and/or they do not die when they are aged or damaged. These abnormal cells then begin to build up in the brain, forming clumps or a mass, and eventually growing large enough to press on or cause damage to the healthy brain tissue.

So why do some cells grow, function, and die normally, while others grow abnormally and develop into a brain tumour? Scientists currently believe that these abnormal cells are the result of mutations (random changes) within the DNA in each cell.
Mutations in oncogenes inhibit when cells grow and divide properly, while mutations in tumour suppressor genes prevent cells from slowing their rate of replication and prevent them from dying at the proper time.
Because mutations are a natural part of the lifecycle of our cells—occurring frequently as our cells grow and divide over time—preventing or predicting these mutations is currently impossible.

A “risk factor” is anything that increases a child’s risk of developing a brain tumour. As stated above, scientists believe that the vast majority of cases of childhood brain tumours are caused by random gene mutations.
Gene mutations are a natural part of human biology and usually do not have a specific or identifiable cause. Therefore, there are very few known risk factors linked to the development of brain tumours in children, with two notable exceptions:

However, radiation therapy has proven to be an effective tool when fighting some types of cancer. While most oncologists will limit or avoid altogether the use of radiation when treating very young children, in some cases, the benefits of treating the immediate threat posed by cancer must be weighed against the potential risk of developing a brain tumour or other secondary cancer in the future.

Can We Prevent a Brain Tumour?

Unfortunately, all too many parents—after hearing that their child has been diagnosed with a brain tumour—feel an overwhelming sense of guilt. Many wonder whether this diagnosis is somehow their fault, or whether they might have been able to do something to prevent this diagnosis.
However, any oncologist will assure these parents that there is absolutely nothing they could have done to prevent their child from developing a brain tumour.
Brain tumours in children are not believed to be linked to any environmental factors or lifestyle choices (with the notable exception of radiation exposure noted above); instead, they are most likely the result of random and uncontrollable gene mutations.