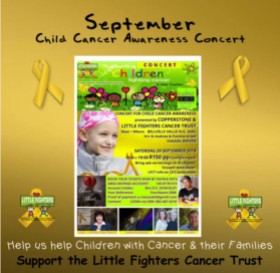 The Little Fighters Cancer Trust is going all-out for Childhood Cancer Awareness this September, as laid out in yesterday’s blogpost, and we are ending the month off in Grand Style with a Concert for Child Cancer Awareness.
The concert is being organised in partnership with Copperstone Talent Search 2018 Finalist, Lizma Dunckley. who will also be one of the performers on the night.
Other performers include Vernon Barnard, Cianna & Brandon, Etienne, and D.O.E.P.
This is a laid-back concert at which guests will be seated at tables, not in rows, and are encouraged to bring their own drinks and refreshments
A snack-bar will be available and there will be an LFCT table filled with information and other goodies. CDs will also be on sale!


ARTISTS WITH A PURPOSE

In 2017 COPPERSTONE started its very own Talent Search competition to not only give upcoming artists a platform to showcase their talent, but also to do good.
Various criteria will determine the winner and ambassadors for the competition. The affiliation with the Humanitarian of the Year competition is to focus on what COPPERSTONE calls “Artists with a Purpose”.

The artists will support Literacy, Cancer projects and the Upliftment in disadvantaged communities. The finalists will have live shows, charity gigs and outreach projects taking place during the year before they will battle it out for the title at the GALA Event on the 10th of November.
Top 5 Finalist, Lizma Dunckley chose the Little Fighters Cancer Trust as her beneficiary for a cancer project, and decided to organise a musical concert, in conjunction with LFCT to raise funds for the work we do with our Little Fighters and their Families.
Lizma is no stranger on the South African music scene, as she has been around for years; she is the owner of Mezzodel Singing and Linedancing and MELISMA Marketing & Events, and has also recently released a CD,  Ek Sal Opstaan, Ek Sal Lewe.
Lizma is also a very popular announcer on Springbok Internet Radio and she has also written a beautiful song especially for Children with Cancer which has not been released yet, but which I have had the privilege to hear, and she will perform it at the concert.