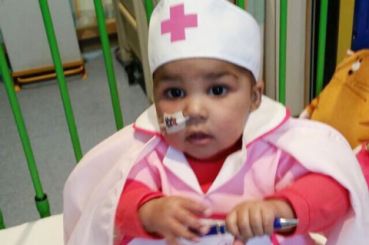 A one-year-old girl, tiny Layla Richards, has become the first person in the world to receive a “designer” immune cell therapy to cure her aggressive “incurable” cancer.

Layla was a mere 14-weeks-old when her mother, Lisa Foley, noticed that Layla’s heart was beating rather fast and that she was constantly crying and hardly eating. Doctors initially suspected that Layla might have a stomach bug, but a blood test diagnosed an aggressive case of a common childhood cancer, Acute Lymphoblastic Leukaemia (ALL).

Layla was immediately to an intensive care unit at Great Ormond Street Hospital (GOSH) in London and treatment was started immediately, but as is often the case with such an aggressive cancer, neither the chemotherapy nor the bone marrow transplant that followed worked. The problem in such aggressive cancers is that cancer cells can remain hidden or resistant to drug therapy.

The cancer returned after seven weeks and the day before her first birthday, her parents were advised by doctors to consider palliative care options.

Layla’s parents, Lisa Foley, 30, a dental receptionist and Ashleigh Richards, 30, a driver, refused to accept there was nothing to be done. They were not prepared to just give up, and asked the doctors to try anything they could.

Recent research suggested that immune cells called T-cells can be harvested from a patient and programmed using gene therapy to recognise and kill cancerous cells. Unfortunately this treatment would not work for Layla because she did not have sufficient healthy T-cells after the chemotherapy she had undergone.

Fortunately for Layla though, the research team at GOSH were involved in trials whereby they were genetically modifying immune cells to fight off cancer while leaving healthy tissue alone. The treatment was still undergoing trials on mice, but it was the only chance that she might have of fighting off her Leukaemia.

Her parents were obviously torn at having to make such a decision.

“She was sick, and in lots of pain, so we had do something. It was scary to think that the treatment had never been used in a human before but even with the risks, there was no doubt that we wanted to try it. Doctors explained that even if we could try the treatment there was no guarantee that it would work but we prayed it would,” said Mr Richards.

It was such cutting-edge science that doctors had to apply to the ethics committee of the hospital and the Medicines and Healthcare products Regulatory Agency (MHRA) to be allowed to try the procedure. Layla would be the first person in the world to receive the treatment.

In genetic therapies, the cells are usually harvested from the patient’s own bone-marrow but doctors knew that this was not an option in Layla’s case.

“The patient was so small and so sick there was no chance of taking cells,” said Waseem Qasim, professor of Cell and Gene Therapy at University College London. “So we used a donor.”

As part of their research, the team at GOSH used modified T-cells from donors, known as UCART19 cells; new genes are added to healthy donor T-cells, enabling them to go into battle against leukaemia.

The treatment involves using “molecular scissors” (technically known as Talens) to edit genes by precisely engineering the DNA inside a donor’s immune cells to create designer immune cells that are programmed to hunt out and kill drug-resistant leukaemia.

The cells are designed to become “invisible” to powerful leukaemia drugs given to patients that would otherwise kill them during the course of treatment, and to seek out and kill only leukaemia cells while not harming healthy cells.

Just one vial of the treatment was available for Layla and Mr Richards said, “We thought that the little bit of liquid in the syringe was nothing. What’s that going to do when bags of chemo haven’t worked?”

Layla was given a small 1ml infusion of the genetically engineered cells, known as Ucart19 cells, intravenously in a 10-minute period. She developed a rash, as doctors expected, but otherwise seemed well.

“Layla didn’t notice anything was going on, and was bouncing around her cot all the way through,” said her mother.

Layla then spent several months in isolation to protect her from infections while her immune system was extremely weak. She was also given a second bone marrow transplant to replace her entire blood and immune system. Her blood cell numbers increased from that point and one month after the transplant, she was well enough to go home.

Now, just a few months after her family was informed that she had incurable cancer, Layla is not only alive, but has no trace of leukaemia in her body.

Mr Richards said: “Even though she is well at the moment, we still don’t know what the future holds. She will still have monthly bone marrow checks for now and might be on some medicines for the rest of her life.”

Ms Foley said: “I consider ourselves lucky that we were in the right place at the right time to get a vial of these cells. Hopefully Layla will stay well and lots more children can be helped with this new treatment.”

What is Acute Lymphoblastic Leukaemia?

Leukaemia is a disease of the white blood cells. All blood cells are made in the bone marrow which releases fully formed cells into the blood.But in acute leukaemia, large numbers of immature white blood cells are released, triggering a drop in red blood and platelet cells and causing  anaemia, tiredness, excessive bleeding and making the body more vulnerable to infection

What is Genetic Editing?

Genetic editing allows changes to be made to the DNA of organisms. It can add genetic information to create new characteristics or remove regions of genetic code, such as those that make people more vulnerable to disease.

There are a few different gene editing techniques but the one used by Great Ormond Street is called TALEN, or Transcription Activator-Like Effector Nucleases.

In nature bacteria attack each other by producing proteins which snip away at DNA. Scientists have hijacked that technique to alter genetic code. The proteins can be engineered to target specific stretches of DNA to create breaks in the code.

How does TALEN help Fight Cancer?

TALEN works like a pair of very tiny scissors which cut specific genes. In this case the scissors were programmed to remove parts of the donor immune cells which would have made them vulnerable to attack from Layla’s immune system. The team also edited the genetic code so that the immune cells would only target cancer cells, and not damage healthy tissue.

Will this Procedure be Available on the NHS?

The present case is a proof of concept and now the scientists must do further trials to check the results can be replicated. If everything goes to plan the procedure could be available throughout the health service within the next decade for a range of cancers and inherited diseases and could mean that no child need die of leukaemia.

Doctors at GOSH have warned that while this is a great step forward, this may not be suitable treatment for all children – describing Layla as ‘one very strong little girl’.

Professor Paul Veys, the director of bone marrow transplant at Gosh and Layla’s head doctor, said the transformation was one of the most remarkable things he’d seen in 20 years:“As this was the first time that the treatment had been used, we didn’t know if or when it would work and so we were over the moon when it did. Her leukaemia was so aggressive that such a response is almost a miracle.”

“We’re in a wonderful place compared to where we were five months ago, but that doesn’t mean cure. The only way we will find out if this is a cure is by waiting that one or two years, but even having got this far from where we were is a major, major step.”

Prof Veys added: “This was the only possible mechanism of achieving a deep remission. There is a potential for cure.”

Waseem Qasim, a professor of cell and gene therapy at the UCL Institute of Child Health and a consultant immunologist at Gosh, said: “We have only used this treatment on one very strong little girl, and we have to be cautious about claiming that this will be a suitable treatment option for all children. But, this is a landmark in the use of new gene-engineering technology and the effects for this child have been staggering. If replicated, it could represent a huge step forward in treating leukaemia and other cancers.”

“This is the first time human cells, engineered in this particular way, have been given back to a patient and that was a big step for us. The technology is moving very fast, the ability to target very specific regions of the genome have suddenly become much more efficient and we think that this technology will be the next phase of treatments.”

“The technology itself has got enormous potential to correct other conditions where cells are engineered and given back to patients or to provide new properties to cells that allow them to be used in a way we can only imagine at the moment.”

Dr Sujith Samarasinghe in the Haematology and Oncology department at Great Ormond Street, added: “There was no other potentially curative option. We had tried every other available therapy in her. Typically the aggressive nature of these illnesses you are talking about a few months. So far the therapy looks promising.”

Dr Simon Waddington, Reader in Gene Transfer Technology, UCL, said: “The researchers have used this technology to create an off-the-shelf, generic cell therapy, rather than one specifically tailored for an individual patient. Therefore this could reduce the cost and complexity of the treatment, and ultimately bring benefit to a wider patient population.”

Dr Yalda Jamshidi, Senior Lecturer in Human Genetics, St George’s University Hospital Foundation Trust, added: “Gene editing is an exciting scientific advance with potential to treat many human genetic diseases. Importantly, unlike recent controversial reports of gene editing in human embryos with another technology modifications made to the T cells should not be passed on to future generations.”

Although doctors will not declare that the treatment is a success until around a year, they are hopeful that the cancer will not return. Because the treatment used donor cells, rather than patient-specific cells, scientists said it could herald a new era in genetic therapies.