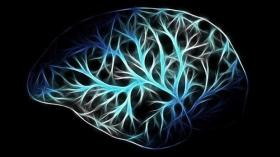 Brain tumours are hard to treat. But even this is a harrowing understatement for some forms of the disease.
Diffuse intrinsic pontine glioma (DIPG) is one such example. These rare brain tumours almost exclusively affect children, and they’re invariably fatal.
“Almost all children with DIPG sadly die within a couple of years of diagnosis,” says Professor Chris Jones from the Institute of Cancer Research, London, a Cancer Research UK-funded expert on the disease.
“There aren’t any effective treatments.”
One of the main reasons that the outlook for DIPG is so poor is down to where it grows in the brain. These tumours start in the brainstem, which lies at the base of the brain and hooks up the spinal cord with deeper brain regions. This crucial piece of machinery controls many of the body’s vital processes, such as breathing and our heart beat.
That means surgery – a cornerstone treatment for many cancers – is out of the question. Drugs are also notoriously ineffective for brain tumours, because most are shut out by the protective blood brain barrier.

DIPG is no exception, and Jones says that no chemotherapies have convincingly shown a beneficial effect, despite many different clinical trials testing a variety of drugs. This leaves radiotherapy as the only option, but it isn’t a cure.
“Radiotherapy is the only treatment that’s been shown to have any effect on DIPG,” he says.
“Usually patients will be given a drug as well in an attempt to find something that works, but the cancer usually comes back within 6-9 months.”

Difficult by Name and by Nature

This situation leaves a pressing need for new treatments. Behind every cancer treatment is research, but that’s where the nature of DIPG presents scientists with yet another challenge.
Studying samples of patients’ tumours in the lab helps scientists understand the biology of the disease and leads them towards new treatments. But for many years biopsy samples weren’t taken from children with DIPG, because the procedure was too dangerous due to the tumours’ delicate position. That left scientists with a shortage of tissue to work with and learn from.
“DIPG is diagnosed by imaging, so questions were raised over the need for invasive and risky biopsies. That set back the collection of tissue for study,” Jones says.
But the field was reawakened in 2012 when a new way of taking biopsy samples with a thin needle was shown to be safe. Using this brain tissue, and also samples taken from children who have died from the diseases, scientists can now grow DIPG cells in the lab and in mice, boosting research efforts and uncovering the genes and molecules that may fuel the disease.
And Jones’ latest research, published in Nature Medicine, is testament to how important these samples are.

More than Meets the Eye

Scientists already knew that DIPG doesn’t grow as a uniform bundle of cells. Instead, these tumours resemble a diverse patchwork of cells with distinct genetic and molecular fingerprints.
“Down the microscope it looks like adult glioblastoma,” says Jones. “So, a variety of drugs designed against the biology of this tumour type have been tried in DIPG patients, but none of them have worked.”
The tumour isn’t limited to the brainstem either; it spreads throughout the brain, seeding new patchworks of cancer cells in distant regions.

We think these different populations of cells are cooperating, helping one another to grow or spread. – Prof Chris Jones

Armed with this knowledge, Jones and his team studied the brains of children who had died of DIPG, comparing the genetic features of different populations of cells. By creating a map of their DNA faults, the scientists showed that spreading cells move early in the tumour’s development, although they tended to grow slower than those in the original tumour.
Next, they grew up samples taken from the brains of children with DIPG into balls of cells in the lab, observing their behaviour and characteristics.
“We found that they were very different; some grew very fast while others didn’t, and some could spread extensively when others couldn’t,” Jones says.
But when they mixed cells together, those that previously had weaker characteristics became more aggressive. “We think these different populations are cooperating, helping one another to grow or spread,” he adds.
This helping hand seems to come from molecular signals that the cancer cells send out, since bathing cells in the liquid that more aggressive cells had been grown in also boosted their ability to divide and spread.

Alongside revealing the intricacies of the disease, Jones hopes that his research brings new, smarter ways to treat DIPG.
“This work opens up a new way of thinking about how we may treat tumours,” he says. “If we can better understand what these different populations of cells are doing, and how they’re interacting, maybe we can identify which ones are the key to go after with drugs.”
With support from Cancer Research UK, the next stage of this research aims to find out precisely that. Hopefully, discoveries that emerge could make their way towards patients sooner, as Jones is also part of a Cancer Research UK-funded clinical trial that’s treating children with DIPG based on the biology of their disease. Because the study is designed to be adaptive, meaning the treatment a child receives on the trial isn’t set in stone, promising new treatments being developed could be added in and tested out in the trial as it progresses.
Supporting this type of research is exactly why we’ve made brain tumours a top priority, and why we’re committing an extra £25 million over the next 5 years specifically for research in this area.
“New, targeted drugs are now starting to make their way into clinical trials for DIPG,” says Jones.
“We don’t yet know whether they’ll work, but ultimately we want to combine targeted drugs with other treatments, such as radiotherapy or immunotherapy.
“For the first time, these kinds of trials are now opening for DIPG.”
And it’s research like this that hopefully means cancers like DIPG will no longer be defined by how hard they are to treat.