Babbette Jaquish, from Eau Claire, Wisconsin was fondly known as the “Sunflower Lady.” Babbette was diagnosed with Multiple Myeloma in the spring of 2006, and she underwent countless grueling treatments, hospital stays, and long distances travels away from home during her almost 9 year battle.

Babbette had 22 different cancer treatments through the years, many of which were through clinical trials, Jaquish said. 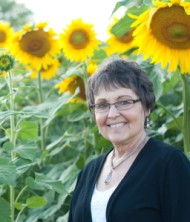 “She realised the importance of research in clinical trials. She went from being expected live two weeks to two months to nine years,” Jaquish told ABC News.

“Her attitude was everyday I can stay alive I’m one day closer to a cure. Unfortunately her health just kept declining over the years, and it got to be too much to start and operate a business when she was so sick.”

Babbette had always wanted to grow sunflowers and sell the seeds for cancer research. Unfortunately, it got to be too much to start and operate a business when she was so sick. 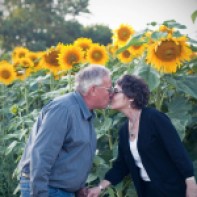 Several months after she died her husband Don found a letter that she secretly wrote to him.

It said, “You move on and live each day… Feel me in the morning air, and when you wake up and make your coffee… I will be there always”

Don fulfilled her dream by planting 400 acres of sunflowers and named it Babbette’s Seeds Of Hope.

Babbette was a mother, wife, daughter, sister and friend to many. She lost her battle on November 17, 2014 but her inspiring journey continues to give hope today. We have never forgotten her dream of a life without cancer for herself and others.

To benefit families dealing with illness, Babbette’s Seeds of Hope will donate a portion of the proceeds from our products to hospitals, research, and patient advocacy.

We have been farmers all our lives and have always had a deep appreciation of the land, nature and

family. We have also experienced firsthand what it is like to have had cancer in our home. Babbette’s Seeds of Hope is a family owned business located along the Chippewa River, our high quality sunflower seeds, corn and wildlife blends will give outdoor enthusiasts hours of bird, deer and other wildlife viewing.

We are proud to offer Babbette’s Seeds of Hope to supply quality wildlife products that are family grown from start to finish, while supporting families with cancer and other illnesses.

It took Jaquish a week to plant the sunflowers that line Wisconsin’s Highway 85 in Eau Claire, this past June.  After a 75-day growing period, the flowers finally bloomed this month.

“She’s always loved flowers, but sunflowers were her favorite,” says Don Jaquish, who planted the sunflowers as a tribute to Babbette, the wife he lost last November to cancer. Looking out from the porch of his white farmhouse, Don says, “They fit her personality. She’d walk into a room and her smile would light up a whole room.”