A risk-factor is anything that affects a person’s chance of getting a disease such as brain cancer.
Different types of cancer have different risk factors, and this article only deals with the potential risk-factors for brain cancer.
Lifestyle-related risk-factors such as diet, body weight, physical activity, and tobacco use play a major role in many adult cancers, but these factors usually take many years to influence cancer risk, therefore logic says that they do not have much of a role in childhood cancers, including brain tumours.
Very few risk factors have been found for brain and spinal cord tumours. There is no clear cause for most of these tumours.

The only well-established environmental risk factor for brain tumours is radiation exposure to the head, which most often comes from the treatment of other conditions.

For example, before the risks of radiation were well-known (50 years + ago), children with ringworm of the scalp (a fungal infection) often received low-dose radiation therapy. This was later found to increase their risk of brain tumours as they got older.
Today, most radiation-induced brain tumors are caused by radiation given to the head to treat other cancers, such as leukemia. These brain tumours usually develop around 10 to 15 years after the radiation, so once again basically exclude childhood brain cancer.
Radiation-induced tumors are still fairly rare, but because of the increased risk (as well as the other side effects), radiation therapy is only given to the head after carefully weighing the possible benefits and risks. For most patients with cancer in or near the brain, the benefits of getting radiation therapy as part of their treatment far outweigh the small risk of developing a brain tumor years later.
The possible risk from foetal or childhood exposure to imaging tests that use radiation, such as x-rays or CT scans, is unknown. Such tests use far lower levels of radiation than those used in radiation treatments, so if there is any increase in risk, it is likely to be very small. To be safe, most doctors recommend that pregnant women and children not undergo such tests unless they are absolutely needed.

In rare cases (less than 5% of brain tumors), children have inherited abnormal genes from a parent that put them at increased risk for certain types of brain tumors. In other cases, these abnormal genes are not inherited but occur as a result of changes (mutations) in the gene before birth.
People with inherited tumor syndromes often have many tumors that start when they are young.
Some of the more well-known syndromes include:

Other Syndromes
Other inherited conditions linked with increased risks of certain types of brain and spinal cord tumours include:

Some families may have genetic disorders that are not well recognised or that could even be unique to a particular family.
Factors with uncertain, controversial, or unproven effects on brain tumour risk include:
Cellphone Use 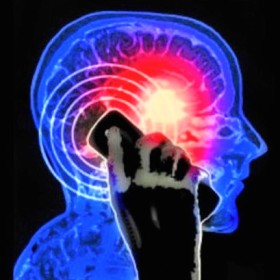 Cell phones give off radio-frequency (RF) rays, a form of electromagnetic energy on the spectrum between FM radio waves and those used in microwave ovens, radar, and satellite stations.
Cell phones do not give off ionizing radiation, the type that can cause cancer by damaging the DNA inside cells. Still, there have been concerns that the phones, whose antennae are built-in and therefore are placed close to the head when being used, might somehow raise the risk of brain tumours.
Some studies have suggested a possible increased risk of brain tumours or of vestibular schwannomas in adults with cell phone use, but most of the larger studies done so far have not found an increased risk, either overall or among specific types of tumours. Still, there are very few studies of long-term use (10 years or more), and cell phones haven’t been around long enough to determine the possible risks of lifetime use.
These risks are being studied, but it will likely be many years before firm conclusions can be made. In the meantime, for people concerned about the possible risks, there are ways to lower their (and their children’s) exposure, such as using the speaker function or an earpiece to move the phone itself away from the head when used.
Other Factors

Exposure to Aspartame (a sugar substitute), exposure to electromagnetic fields from power lines and transformers, and infection with certain viruses have been suggested as possible risk factors.
Most researchers however agree that there is no convincing evidence to link these factors to brain tumours.
Research on these and other potential risk factors continues.