Halloween’s origins date back to the ancient Celtic festival of Samhain (pronounced sow-in). The Celts, who lived 2,000 years ago in the area that is now Ireland, the United Kingdom and northern France, celebrated their new year on November 1.
This day marked the end of summer and the harvest and the beginning of the dark, cold winter, a time of year that was often associated with human death. Celts believed that on the night before the new year, the boundary between the worlds of the living and the dead became blurred. On the night of October 31 they celebrated Samhain, when it was believed that the ghosts of the dead returned to earth.
In addition to causing trouble and damaging crops, Celts thought that the presence of the otherworldly spirits made it easier for the Druids, or Celtic priests, to make predictions about the future. For a people entirely dependent on the volatile natural world, these prophecies were an important source of comfort and direction during the long, dark winter.
To commemorate the event, Druids built huge sacred bonfires, where the people gathered to burn crops and animals as sacrifices to the Celtic deities. During the celebration, the Celts wore costumes, typically consisting of animal heads and skins, and attempted to tell each other’s fortunes.
When the celebration was over, they re-lit their hearth fires, which they had extinguished earlier that evening, from the sacred bonfire to help protect them during the coming winter.

5th Century B.C. – Celts observe the festival of Samhain at the end of October, when they believe ghosts and demons roam the earth more so than at other times.
43 A.D – The Romans conquer the Celts and adopt the spiritual rituals of Samhain combined with Roman festivals Feralia & Pomona
609 A.D. – dedicated the Pantheon in Rome in honour of all Christian martyrs, and the Catholic feast of All Martyrs Day was established in the Western church. Pope Gregory III later expanded the festival to include all saints as well as all martyrs, and moved the observance from May 13 to November 1.

1000 A.D. – 2nd November is designated as All Souls’ Day to commemorate the dead. It’s widely believed today that the church was attempting to replace the Celtic festival of the dead with a related church-sanctioned holiday.
All Souls Day was celebrated similarly to Samhain, with big bonfires, parades, and dressing up in costumes as saints, angels and devils. The All Saints Day celebration was also called All-hallows or All-hallowmas (from Middle English Alholowmesse meaning All Saints’ Day) and the night before it, the traditional night of Samhain in the Celtic religion, began to be called All-Hallows Eve and, eventually, Halloween.
Irish emigrants took the Halloween custom with them to the United States, and over time, combined with similar customs of emigrants from Britain and Germany, as well as Africa and other parts of the world, the custom has slowly spread to other countries.

Vampires, Werewolves, Witches, Zombies: These creatures have long been associated with the evil spirit world.

Candy: The ancient Celts tried to appease wicked spirits with sweets. The church later encouraged celebrants to go from house to house on All Hallows’ Eve, asking for food in return for a prayer for the dead. This custom eventually became Halloween’s trick or treat.
Costumes: The Celts wore frightening masks so that evil spirits would mistakenly think the wearers were spirits and would leave them alone. The church gradually amalgamated pagan customs with the feasts of All Souls and All Saints. Later, celebrants went from house to house wearing costumes of saints, angels, and devils.
Pumpkins: Carved, candlelit turnips were displayed to repel evil spirits. To some, the candle in the turnip represented a soul trapped in purgatory. Later, carved pumpkins were more commonly used.

Put some savoury in your Halloween platter this year with these cheesy pretzel broomstick snacks. Wonderfully witchy and surprisingly more-ish, they’ll fly off your Halloween table before you can say, “Trick or treat”!
serves: 12
Ingredients 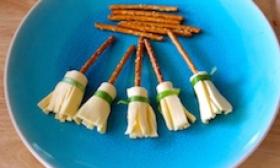 This hyper-green smoothie is not only a perfect drink for Halloween, it’s packed with healthy fruit and veggies!
Serves: 2 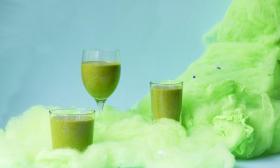 These Halloween eyeball cupcakes are fun to make and kids will love them. Use them as a feature at your next creepy Halloween celebration.

Want a spooky cupcake to liven up your Halloween table? These Tombstone cupcakes are easy-peasy and you will be able to get these on a plate quick smart!

These spider cookies are so tasty, who knows how many will crawl into your mouth before making it onto the plate 😉
Servings: 24
Ingredients

These ghoulish severed finger biscuits will have your guests shaking their heads until they actually taste them. It turns out that severed fingers are delicious!

These chipolatas are wrapped in pastry bandages to make them spooky in a very cute, yummy way.
Servings: 24 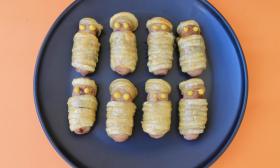 This spooky no-bake cheesecake laced with a chocolate spiderweb is the perfect centre-piece for your Halloween party table.
Servings: 12
Ingredients 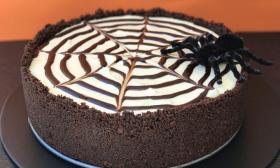 This vibrant ice cream has a deep black colour and a tangy and sweet lime flavour! Not only does this gloriously and naturally coloured ice cream make the perfect Halloween ice cream, but it also offers benefits as well. This paleo version is dairy-free and egg-free, so it is suitable for many diets.
The secret to black ice cream is activated charcoal, which lends itself well to a gag treat for Halloween, but is also healthy as activated charcoal acts like a mop in your digestive track.
Ingredients

Have FUN trying out the above recipes this Halloween

Related Articles
When your Little Fighter Must Stay at Home

🎗🎗 Support Children with Cancer 🎗🎗
🎗📣🎗GREAT NEWS❣️❣️🎗
Christmas is not a happy time for everyone – there are many individuals for whom the Festive Season is very painful as it is the time that they miss those who are gone the most.
❤️🧡💛💚💙💜❤️🧡💛💚💙💜❤️🧡💛💚💙💜 LFCT would like to send a HUGE shout-out to Kargo Pty Ltd, Paarl Lions and Paarl Vetus Schola for their help in getting food parcels to our beneficiaries 🥰🥰🙏 We would not be able to continue offering support without you guys 'n gals - YOU ROCK❣️❣️❣️ 🕺👯‍♀️💃💞 ❤️🧡💛💚💙💜❤️🧡💛💚💙💜❤️🧡💛💚💙💜
Support plse - proceeds to LFCT to help children with cancer and their families
Thanks Kinovi Montessori for raising Childhood Cancer Awareness by selling gold ribbons and donating proceeds to LFCT 🥰🎗
Lions Paarl Pancake Day celebrating Internatuinal Childhood Cancer Day @ LFCT HQ
Need some new clothes, kitchen equipment, toys for your youngsters but cannot afford it?